Hurricane Gustav occurred between 25 August and 4 September 2008. It was classified as a category 2 hurricane when it made landfall in Louisiana. Rainfall over Louisiana and Arkansas caused moderate flooding along many rivers. Gustav is known to have produced 41 tornadoes – 21 in Mississippi, 11 in Louisiana, 6 in Florida, 2 in Arkansas, and 1 in Alabama. The strongest tornado was an EF2 in Evangeline Parish, Louisiana. The hurricane caused widespread storm surge along the northern Gulf coast. Surges of 12-13 feet occurred along the Louisiana coast in the Mississippi Delta southeast of New Orleans, with surges of 9-10 ft in other portions of southeastern Louisiana. Maximum sustained winds up to 90 knots were recorded during this Hurricane in the United States. There was a total of 13 fatalities in the United States with about $2.15 billion property damage [NOAA, 2009]1. 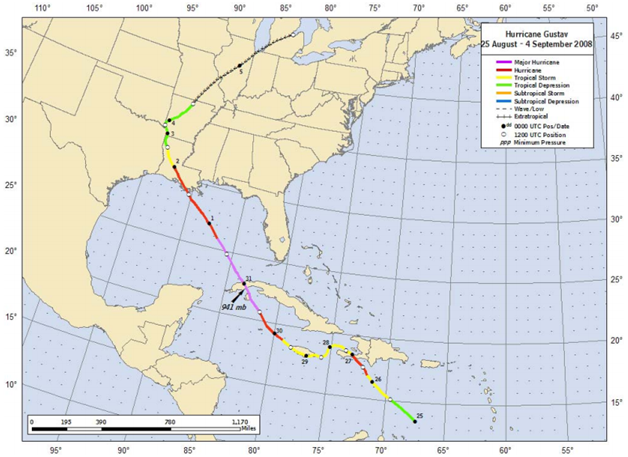