How Much And When Did People Shape Modern Neotropical Landscapes?

Our work in the Andes began as a quest to look at the impacts of the last ice age, but increasingly we are drawn to looking at the deglacial period and the current interglacial. In other words, the portion of time that humans arrived in and occupied the Andes. Ecologists studying modern systems are realizing that you cannnot separate human from 'natural' influences. Humans change fire regimes and we load the atmosphere with CO2 and nitrates, such that every ecosystem is modified by human activity. Should we draw a bright line and say that this was only true of an industrialized world or should we establish a longer timeframe to evaluate how humans have changed landscapes?

Our research interest converged on this investigation somewhat organically. We were already documenting the first fire histories in the Andes, we were investigating the timing of population declines of megafauna, the interaction between crop cultivation and climate change, and the extent of pre-Columbian lowland Amazonian forest modification, and so we brought an ecological view to what had become an archaeological question. As our research matured, a clear linkage emerged - that humans were resourceful, adaptive, but above all influential in shaping landscapes wherever they went. The key questions became where did they go? When did they get there? and What were their behavioral adaptations to changing conditions through time?

While we have implicated people in the collapse of megafaunal populations as probably the first major impact that humans had on South American ecosystems,  it was the introduction of fire to systems that had not evolved to burn that was to have even greater consequences. This transition from unburned to burned settings precipitated what are termed 'manufactured landscapes'. The high grasslands of the Andes are a clear example of long-term management completely altering an ecosystem. Less obvious are equivalent trends in cloud forests and in lowland rainforests.  We see people burning and cultivating in Amazonia and in some cloud forest locations for at least the last 6000 years. But there are really big questions that remain about how widespread these changes were. Should we be thinking of Amazonia and  cloud forests as other examples of manufactured landscapes? There are genuine disagreements among experts about the scale of human impacts and this arena is an exciting one, churning with new dicoveries.

In the 1970s, Amazonia was believed to be a pristine ecosystem with little to no human influences when Europeans arrived in 1492. However, recent evidence suggests that pre-Columbian human settlements were present throughout the basin and that people caused widespread landscape modifications, resulting in a “manufactured ecosystem”. This belief is deemed the 1491 hypothesis and data supporting it originate from some archaeological sites in Amazonia. However, the inference of widespread landscape modification is an extension of localized patterns onto the entire basin. With this idea also comes an implied resiliency of the rainforest to landscape modifications. Assuming this to be truth without basin wide testing may lead to unsound conservation and management policies in Amazonia in which it is assumed that it is OK to disturb things as they will grow back. Alternatively, if we insiste that Amazonia is a near-pristine setting and it is too fragile to take any level of disturbance, we are setting an impossibly high bar for future conservation. Finding how resilient theses systems are to human disturbance and climate change is critically important if well-informed policy is to be implemented.

To test the 1491 hypothesis, we are trying to determine the spatial and temporal extent of pre-Columbian human impacts in Amazonia by recreating the fire history of the basin (as fire is the most widespread landscape modification by humans). We are using soil charcoal analysis to determine local fire histories and lake sediment charcoal analysis to determine regional fire histories. We are also using phytolith analysis (from soils) and pollen analysis (from lake cores) to reconstruct vegetation shifts associated with fire. We want to combine these data to produce spatial and temporal models of human occupation in Amazonia. We are looking for the residual influence of past land use - and here we also include the rubber boom of 1850-1920 - and whether there are legacies of past land use that still shape forests that appear mature and untouched.

I believe that these are not just academic questions but go to the heart of understanding the modern biogeography and resilience of Amazonian ecosystems.

What Happened To The Megafauna?

At the end of the last ice age >80% of mammals weighing >50 kg went extinct in South America. Although the North American extinction is better known, the number of species lost and the proportion lost was highest in South America. Three prevailing hypotheses are that the extinction was caused by a human-induced overkill as people entered the landscape, a climatically induced die-off as the ice age ended, or an ecological cascade of effects as keystone species were lost.

Through paleoecological analyses we are investigating the timing of this extinction event relative to human presence, climate change, and fire frequency. We use lake sediments as a source of our microfossil material and use the pollen to tell us about vegetation changes, diatoms to tell us about water quality, charcoal to quantify fire frequency, and a spore from a fungus that only grows on herbivore dung to tell us about herbivore biomass around the lake. The spore belongs to a genus called Sporormiella, and after doing some studies in modern lakes with and without large herbivores (horses, llamas, and cows) we can show that Sporormiella provides an accurate measure of their presence and does not record the presence of small mammals.

We are analyzing cores from Ecuador,   Bolivia, Peru, Brazil, and Guatemala for changes in the past abundance of Sporormiella and finding that there is a large decline in its abundance at the end of the last ice age. Many lakes show an extinction between 12,800 and 12,500 years ago, and this appears to be strongly related to human activity. But intriguingly, in some lakes there appears to be an earlier decline. Does this indicate a very early human presence in the Andes or that the megafaunal populations initially collapsed due to climate change?

We have also been looking at the relatively recent changes in Tortoise abundance on the galapagos. The signatures of whalers and settlers moving to th islands are clearly evident in both pollen and Sporormiella histories.

What is the history of El Niño Southern Oscillation?

El Niño Southern Oscillation (ENSO) is the largest single cause of interannual climate variability, but we know very little of its history. That history includes how it inteacts with other forcing events such as the Pacific Decadal Oscillation or the Atlantic Multidecadal Oscillation.  We have used long sedimentary records from Amazonia, the Andes, and the Galapagos to investigate the history of ENSO. Research in the Galapagos Islands is focused on mid to late Holocene climate in the tropical Pacific, with particular emphasis on the frequency and intensity of El Niño and the Southern Oscillation, as well as the Little Ice Age and Mediaeval Warm Period. Human impact on the islands is also being assessed from recent paleorecords from high resolution lake records. During field seasons between 2004 and 2007, sediment coreswere retrieved from crater lakes such as from Lago Guerrero (Genovesa), Lago Bainbridge (Rochas Bainbridge), El Junco (San Cristobal), and Paul’s Bog (Santa Cruz). A pollen trapping study involving c. 140 traps and ten Hobo temperature and humidity data loggers was conducted on each of these islands. Weather stations and sediment traps   These modern pollen records provide baseline data to assist in the interpretation of the fossil pollen records.  X-ray fluorescence (XRF), color analysis and isotopic chemistry are being applied to these cores to resolve histories of ENSO variability.

Long sediment cores that deposit rapidly offer the potential to get highly-resolved histories. If those cores are laminated by wet-season/dry-season cycles the potential to pick apart years of exceptional rainfall or drought becomes possible. Lake Sauce in Peru offered such a system and now we have found another very exciting lake with huge potential for paleoclimatic studies. Laguna de Cube in the Ecuadorean Choco deposited 15 m of sediment in the last 4200 years. The Choco region is on the Pacific side of the Andes, is very wet, but is also highly impcted by ENSO events. The sediments from Laguna de Cube are laminated and we are going to determine if this system holds an ENSO history. Further fieldwork to be conducted there will try to obtain an even deeper/longer record. 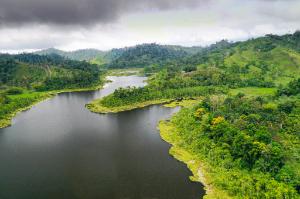 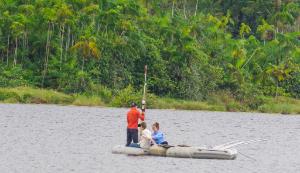 Did Amazonia experience a climatic tipping point in the past?

Is Amazonia close to a climatic tipping point? It is hard to imagine a larger ecological catastrophe than have Amazonian rainforests flip to a savanna grassland system within our lifetime; but that is a distinct possibility. Paleoecology can help to assess the likelihood that such an event could happen given a 0.5 oC or 2 oC warming. The mid-Holocene warm event  (9000-4000 years ago) was about 0.5oC warmer than present  and the last interglacial (130,000-120,000 years ago) was about 2 oC warmer than modern. We are investigating records from Amazonia and the Andes that span these time intervals to determine if there were major changes in vegetation that were associated with them. Finding such old lake sediments is extremely challenging and required fieldwork in very remote settings.

Unpiloted aerial systems (drones) offer some exciting opportunities in paleoecology. Our spatial scale of study varies from the very localized if we are using phytoliths that maybe only disperse a few meters before being incorprated into soils or several kilometers for the majority of pollen to reach a lake.  Finding vegetation data that can reflect such divergent scales can be challenging, especialy in Amazonia. UASs are not a silver bullet, but they can quickly and cheaply increase the scale of study from traditional tree plots of 1 hectare (2.2 acres) to flights that can cover many tens of hectares  in just a few hours. 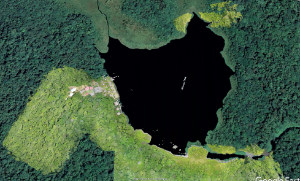 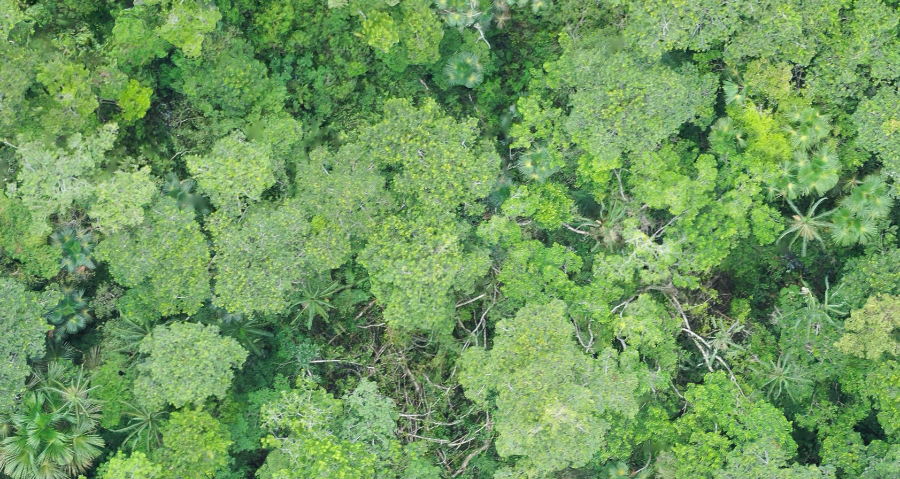 Lake Añangucocha, Ecuador, showing bringht green UAS orthomosaic relative to the darl=ker green Google Earth imagery. Enlargement of a section of the forest to the south of Añangucocha.

We fly about 80 m above the forest and from this imagery we can identify many of the palm species, key disturbance indicators like Cecropia, and large emergents like Ceiba. we are working with colleagues in computer science to automate canopy recognition and gain even greater value from this tool. 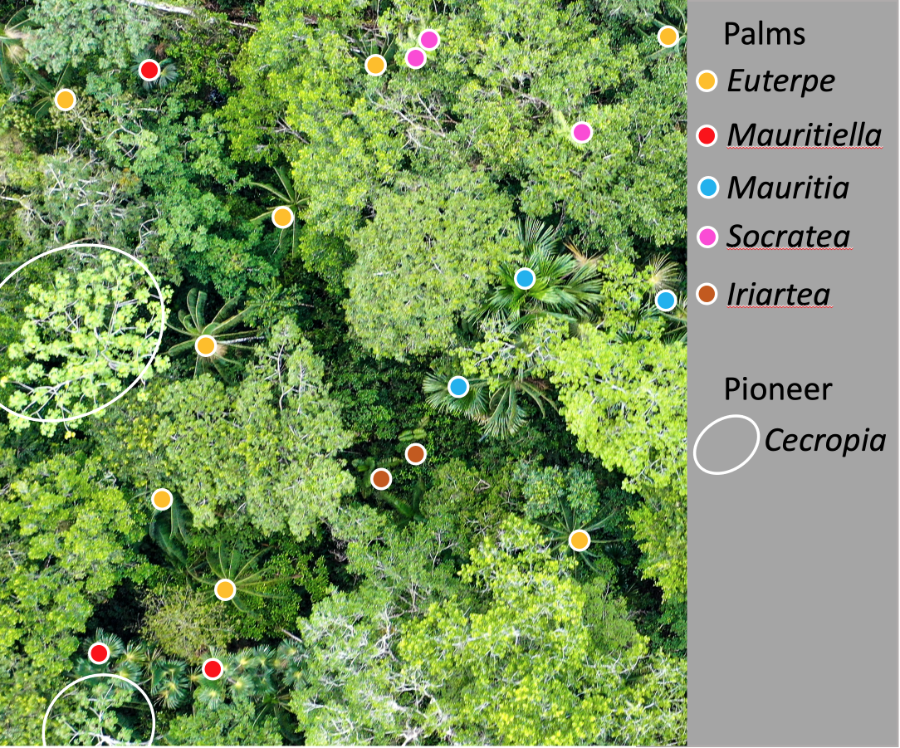 Labeled trees in the forest canopy from Añangucocha