Lightning flashes are one of the most fascinating atmospheric phenomena on Earth, which have attracted the attention of many researchers since ancient times. Surprisingly, there is still no answer to a fundamental question of lightning production in thunderclouds: How does lightning initiate in the thundercloud? With the recent advancement of lightning detection instruments, probing techniques of thundercloud electric fields and charges, and air breakdown theories, signifi cant progress has been achieved in the field of lightning research during the last decade. However, the details of the origin of the lightning within thunderstorms and the physical mechanisms of the lightning initiation remain unclear. The purpose of this research is to study the lightning initiation process from the perspective of conventional breakdown theory of air. The inception of streamers and leaders in the vicinity of thundercloud hydrometeors will be investigated through numerical and theoretical modeling. 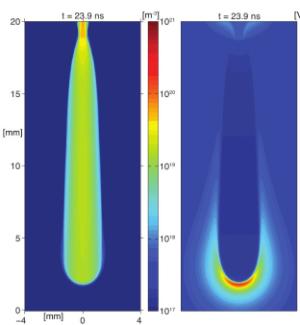 Thunderclouds and lightning routinely emit x-rays and gamma-rays. Examples of such emissions are sub-microsecond bursts of x-rays associated with lightning leaders, sub-millisecond bursts of gamma-rays seen in space called Terrestrial Gamma-ray Flashes (TGFs), and minute long glows from thunderclouds. It is generally believed that these x-ray and gamma-ray emissions are generated, via bremsstrahlung, by energetic runaway electrons that are accelerated by electric fields in the atmosphere. Here at GPL we study these emissions using a combination of theoretical modeling and experimental measurements. A series of recent theoretical breakthroughs and experiments by our team working at both this lab and the International Center for Lightning Research and Testing (ICLRT) has led to the discovery of x-ray emission from rocket-trigerred lightning. Moreover, scientists at GPL have developed a promising physics-based model of exactly how thunderstorms manage to produce high-energy radiation. According to their model, instead of creating normal lightning, thunderstorms can sometimes produce an exotic kind of electrical breakdown that involves high-energy electrons and their anti-matter equivalent called positrons. The interplay between the electrons and positrons causes an explosive growth in the number of these high-energy particles, emitting the observed flash of gamma-rays while rapidly discharging the thundercloud, sometimes even faster than normal lightning. Even though copious gamma-rays are emitted by this process, very little visible light is produced, creating a kind of electrical breakdown within the storms called “dark lightning.”

Transient luminous events (TLEs) include a group of large electrical discharges of air occurring in the upper atmosphere. They are driven by thunderstorm activities at tropospheric altitudes. There are at least four currently known forms of TLEs: blue jets, elves, gigantic jets, and sprites. Blue jets emanate from the top of thunderclouds up to an altitude of 40 km. Elves are lightning-induced flashes that can spread over 300 km laterally. Gigantic jets are upward moving electrical discharges establishing a direct path of electrical contact between thundercloud tops and the lower ionosphere. Sprites occur in the mesosphere at a range of 50-90 km. They last for a very short period of time, typically on the order of 1-10 ms. Sprites are commonly observed around the world but are mostly seen over populated areas in North, Central and South America, Europe, Japan, China and Australia. Observations have shown sprites normally initiate with streamer discharges at an altitude around 70-75 km which develop downward and then upward at times. Sprite streamers travel at speed from 10^5 to 10^7 m/s. Sprite-parent +CGs produce charge moments of hundreds of C km. 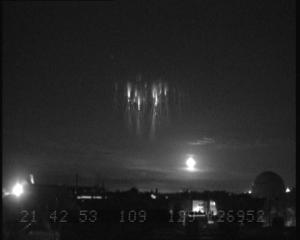