An instrument has been developed to measure the drag forces due to roughness and fouling, and to observe the fouling-release process on a standard 0.254m x 0.305m static immersion panel. The instrument consists of a floating-element drag meter, a pitot-static tube, and a video camera.

The instrument is mounted into the wet well of a power boat. The static immersion test panel becomes an integral part of the boat hull. This enables the test surfaces to be subjected to boundary layer conditions as developed on ship and boat hulls at water velocities up to 12 m/s (23 knots).

The test panels are mounted on a portal-type floating-element force balance, which is built into the instrument box. There is a 3mm gap around the test panel. The force gage uses four foil strain gages connected in a full bridge circuit that creates a linear voltage response that is insensitive to moments. The advantage of using this type of gage is that it can be optimized for a specific range of forces thus increasing sensitivity.

A pitot-static probe extends above the test section to measure the dynamic pressure that can be used to determine the free stream flow velocity, using Bernoulli's equation.

A video camera is mounted adjacent to the test section. This records the condition of the fouling community and real-time fouling-release. 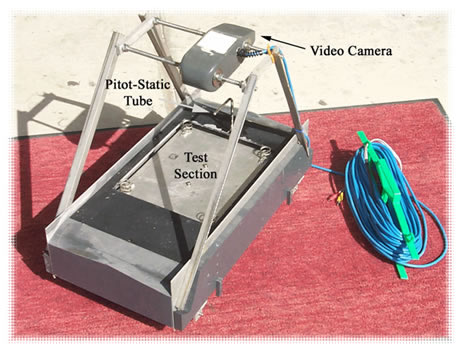 The instrument is lowered into the wet-well, which has been built into the hull of a powerboat. The test section forms an integral part of the hull with minimal disturbance to the flow. The system can operate at velocities up to 12m/s. The force gage measures the shear force due to the flow over the test surface at different velocities.

Instrumentation on the boat includes a data logger to record the drag forces on the panels and the free stream velocity. A digital video recorder provides real-time images of fouling-release with the force and velocity data overlaying the image.

The test panels are immersed in seawater at the Florida Institute of Technology Static Immersion site in the Indian River Lagoon. The panels are caged to prevent removal of fouling by fish and other organisms. When sufficient fouling has become established, the coatings are visually inspected for fouling and physical condition. Barnacle shear adhesion (ASTM D5618) measurements are made. Seawater temperature and salinity are measured to determine density and kinematic viscosity. The panel is then attached to the through-hull drag meter and secured in the wet well. Care is taken to ensure that the panel is flush with the instrument surface. The instrumentation is zeroed to confirm that all of the devices are working properly. The panel is tested at 2, 4, 6, 8, and 11m/s for a period of one minute at each velocity.

It is important to note that testing is only completed when there is less than 0.1m chop and wind less than 2.5m/s to minimize errors in flow around the hull.