The water jet test was developed to provide a more general assessment of biofouling adhesion and to be fully portable and self contained for field operations. Unlike barnacle adhesion testing, this method is more difficult to quantify due to the variation in texture and adhesive mechanisms associated with the different types of organisms.

Calculation and Interpretation of Results

The biofilm is divided into hard foulers, soft foulers and slime films. The water jet pressure required to remove each of these groups is recorded. The maximum true force exerted by the water jet at the surface for each air pressure setting was measured using a force transducer and by observing the area over which the water exerted an effect and is shown below. 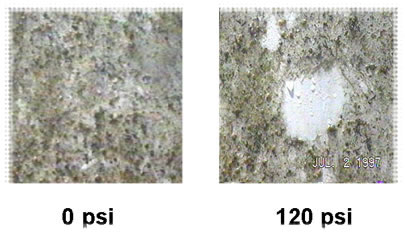