This test method measures the shear strength of barnacles to a surface. It is used to establish the ability of a surface to reduce adhesion.

The apparatus required for this procedure includes a force gage to apply and measure shear force at the base of the barnacle, and a scanner plus software to measure the surface area of the barnacle base plate. 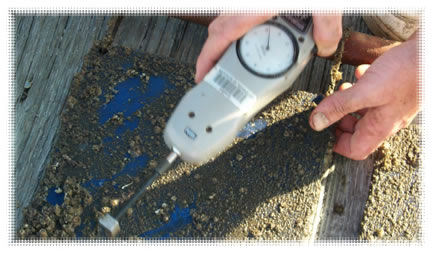 Test surfaces that are exposed to static immersion are monitored for barnacle settlement. To facilitate adult barnacle growth on silicones with low fouling adhesion strengths, it has been found necessary to enclose the test area with a 25mm (1 inch) mesh net that excludes larger fish and other predators which would otherwise remove the immature forms. When settlement is observed, the shear strength of adhesion is measured as described below.

Calculation and Interpretation of Results

The strength of adhesion, pascals (psi), is calculated by dividing the force required to remove the barnacle, F newtons (pounds), by the area of the barnacle base plate, A square meters (square inches).

For each test surface the mean and standard deviation of the strength of adhesion is calculated. This is compared to typical shear adhesion strengths of Balanus eburneus to different substrates.