Dr Michael King joined Florida Institute of Technology’s Harris Institute for Assured Information as a Research Scientist in 2015 and holds a joint appointment as Associate Professor in the Department of Computer Engineering and Sciences with an emphasis in cyber security.

Dr King received his PhD in Electrical Engineering from North Carolina Agricultural and Technical State University in 2001 and has research interests in the areas of biometrics, cyber identity, and machine learning.

Kay Michel is currently a PhD Candidate in Computer Science with a research focus in Cyber Identity. She has 15+years of government contractor communications industry experience leading multi-million $ R&D and Engineering Projects, developing strategic technology roadmaps and proposals, and teaching advanced C++ and C# Courses. Kay and her specialized expert teams have received awards for developing innovative emerging comms platforms and visualizations for Cyber, Augmented Reality (AR), and Virtual Worlds (VW’s) systems. Kay has also received Nasa awards for novel Space Shuttle Automated Testing, and she is planning to defend her dissertation soon to start her next research scientist/professor roles.

Prasad is pursuing his M.S. in Computer Science at Florida Institute of Technology. His current Masters research topics are Multi spectral Face Recognition prototype development. He completed his undergraduate studies in Industrial Electronics Engineering in 1990 at Amravati University, India.  After finishing his studies, and working in industry for last 28 years, he would like to obtain his Masters degree in computer science. Prasad is a United States Commercial pilot and volunteers at Angel Flight. He is currently working on designing MSFR prototype using an embedded platform under the guidance of Dr. King. His hobbies are flying and playing tennis. He is a strong supporter of orphanage homes in India.

Gio is pursuing his M.S. in Information Assurance and Cyber Security at Florida Institute of Technology; where he completed his double major in Electrical and Computer Engineering as an undergrad. He currently does research in the Biometrics field but is also focused on Cyber Identities, Data Collection, and Social Media. He has had experiences as an intern an electronics manufacturing company, lab instructor for the Comp. Eng department, and the student in charge of the Harris Design Center. Gio has also served as a board member of several organizations in Florida Tech like Vice-Chair of the IEEE Student branch and current Vice-Chair of the Society of Hispanic Professional Engineers (SHPE).  His interests are not limited to the technical side as he enjoys, business, debating, public speaking, making music and writing among other hobbies. 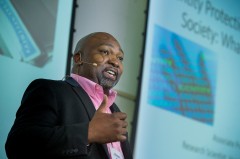