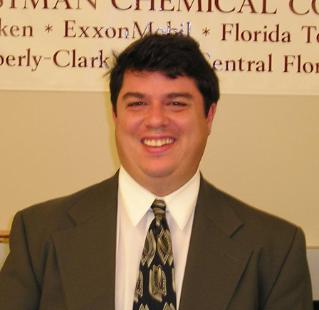 The key themes of his work are

Since joining the faculty at Florida Tech in 1998, Prof. Brenner has worked in the areas of hydrogen storage, purification, and sensing. All of these areas continue to build on the same fundamental concepts described previously. Most of his work has focused on development of metal hydride-based (typically Pd alloy) thin films on porous stainless steel (PSS) foam supports for hydrogen purification. Hydrogen purification is critical to the implementation of hydrogen fuel cells, as the fuel cells are intolerant of even parts per million of impurities of sulfur and CO. No one would want their hydrogen fuel cell vehicle to die prematurely of "engine failure" after only a few thousand miles. This work is part of a larger, Florida Tech-wide effort toward a completely hydrogen-driven airplane. The fluxes through such thin film hydrogen permeation membranes are limited by the thickness of the metal hydride thin film, which is in turn limited by the maximum pore size of the support. As a result, in 2006, he has begun work toward partially filling the PSS supports with a templated porous carbon, before depositing a now much thinner, bimetallic metal hydride thin film on top using concepts developed by Raymond Schaak of Texas A&M. Also in 2006, Dr. Brenner is beginning development of nanoporous metallic foams based on the pioneering work of Bryce Tappan of Los Alamos National Laboratory. In 2001, Dr. Brenner collaborated with Dr. Martha Williams of NASA-KSC and Prof. Gordon Nelson of Florida Tech on a family of porous polymer candidates to replace the now infamous orange insulation around the liquid oxygen tanks of the Space Shuttle Columbia that flaked off during the 2003 disaster. In 2001, Dr. Brenner began development of porous polymers for molecular recognition, with applications in theelectronic nose and tongue businesses and in detection and purification of enantiomers used in the pharmaceutical, agricultural chemical, and fragrance industries. Recently, he has begun development of an electronic nose as well, based on collection of impedance spectra of the responses of an array of polymer/carbon composites deposited on capacitors to a range of scents. The detection of such aromas, as well as quantification of concentrations, is determined via advanced pattern recognition algorithms such as linear discriminant analysis. Both the sensing and the pattern recognition are accomplished using National Instruments LabView and a LabView pattern recognition toolkit from Camo Corporation. Dr. Brenner also has plans for adapting this technology for the detection of molecules and macromolecules in liquids, with an eventual goal of detection of cancer biomarkers in blood and urine for use in an inexpensive kit associated with a yearly physical examination. In 2005, Dr. Brenner began work on development of an array of porous carbons around a family of monodispersed silica templates using molecular self assembly methods using sucrose, phenol and formaldehyde, or resorcinol and formaldehyde as the carbon- forming precursors. Upon extraction of the silica using KOH, the pores in the carbons were the imprints of the silica templating agents. In late 2006, Dr. Brenner plans to evaluate these templated porous carbons as novel gas diffusion layers for hydrogen fuel cells. Gas diffusion layers have largely been ignored in fuel cell development and are currently best described as a 2-D mesh of carbon fibers similar to those found in paper. If fuel cells are going to have sufficiently high current densities in order to be practical in vehicles, one problem that must be solved is the relatively poor mass transfer through existing gas diffusion layers. The goal of the templated porous carbon project is to discover an optimal pore size distribution for such gas diffusion layers.

Prof. Brenner obtained his B.S. in ChE from the University of Delaware. While at Delaware, he completed two Monte Carlo simulation projects. The first involved the depolymerization of lignin (wood), the key first step in papermaking. The second project involved the generation of hydrogenated amorphous silicon thin film semiconductors, followed by an analysis of how synthesis conditions affected film properties and device performance. He then went on to do his M.S. and Ph.D. degrees in chemical engineering from The University of Michigan under Prof. Levi Thompson, with his work focusing on development of catalysts for hydrodesulfurization and hydrodenitrogenation of crude oil. Since the start of Dr. Brenner's graduate work, the key themes of his work are

During this time, Prof. Brenner became an expert in a number of areas of materials characterization including Fourier transform infrared spectroscopy of molecules adsorbed (sticking) to surfaces and temperature-programmed desorption of these molecules, residual gas analysis of molecules desorbed from surfaces, chemisorption and physisorption, pore and particle size distribution analysis, surface area measurements, and scanning and transmission electron microscopies. Prof. Brenner's synthesis expertise during this time was in the development of porous, high surface area metal nitrides and carbides, which are interstitial compounds. After continuing similar work, as well as some work in the area of nanotechnology while a postdoc at Argonne National Laboratory, Prof. Brenner worked at Westinghouse Savannah River Company (WSRC) in the area of hydrogen storage using metal hydrides, yet another class of interstitial compounds. His key development during his work at WSRC was the use of metallic foams, a new class of porous metals, as media for the enhancement of heat transfer into and out of hydrogen storage beds. Such a development was critical for our nation's tritium mission (Tritium is a nuclear isotope of hydrogen.), but if hydrogen vehicles are to become a reality, cutting down the time for refueling to a reasonable time, as this heat transfer improvement enabled, was critical.