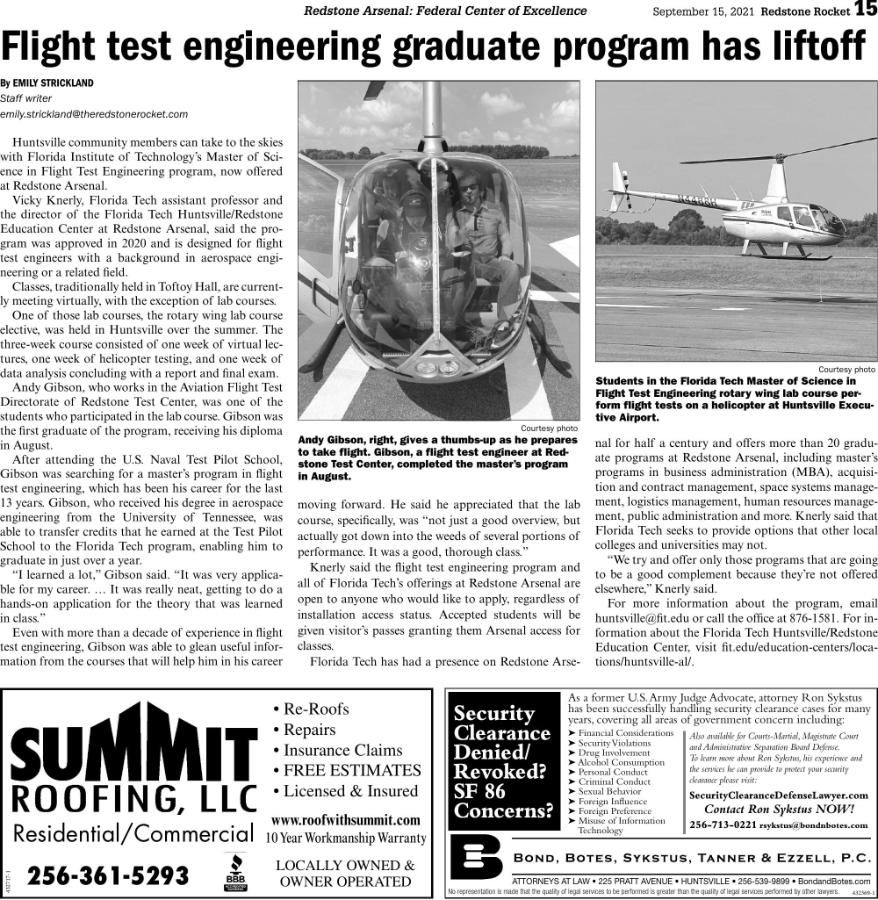 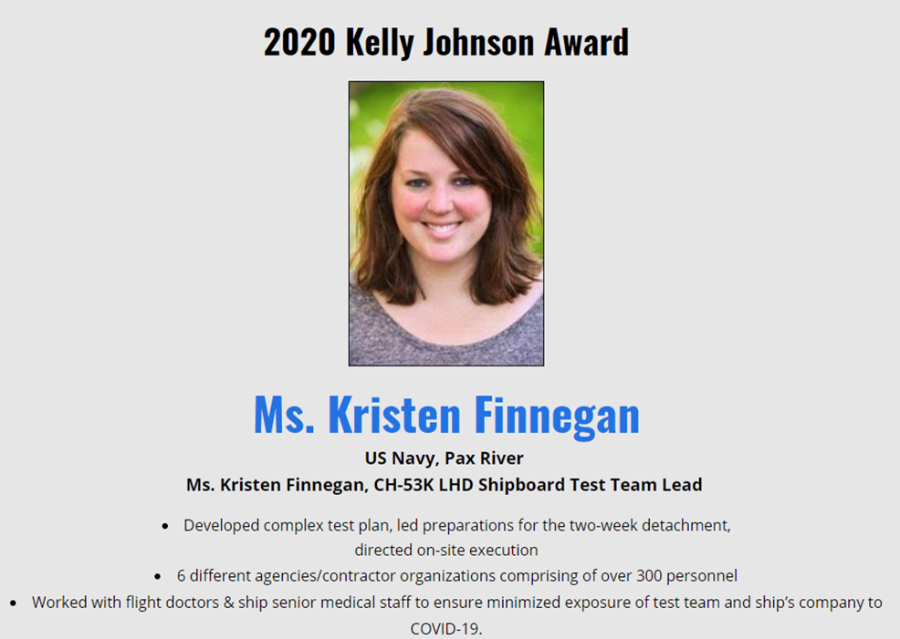 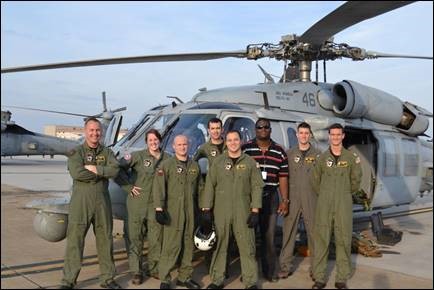 Kristen Finnegan is the woman behind the scenes of the recently completed successful sea trial for the CH-53K King Stallion. Completed in June 2020, the aircraft’s first sea trial took 12-months of planning. Sea trials evaluate a state-of-the-art aircraft in a modern naval environment, and coordinating this vital test event with the surface Navy takes experience, flexibility, creativity and a lot of patience.

Flight test projects are co-led by a project engineer and project officer. As a graduate of Penn State’s Aerospace Engineering program, the Florida Institute of Technology and the U.S. Navy Test Pilot School Graduate Class 148, Finnegan was perfectly positioned to be the Lead Project Engineer.

The first challenge she faced was finding a ship for the trials. The ITT needed two weeks of dedicated operations to complete the tests and a lot of up-front preparation time. Navy ship assets are heavily tasked and testing is not always a priority. Most testing is performed with only a few months’ notice of ship availability, so finding a suitable ship far in advance for that length of time was a big “ask.” After months of discussions, Finnegan was able to secure USS Wasp (LHD) for the June 2020 tests.

Finnegan began training the team members (mostly volunteers from the ITT) in what to expect onboard — from shipboard etiquette to what to pack. The team needed to understand how a ship operates — including how tests on a ship are scheduled. 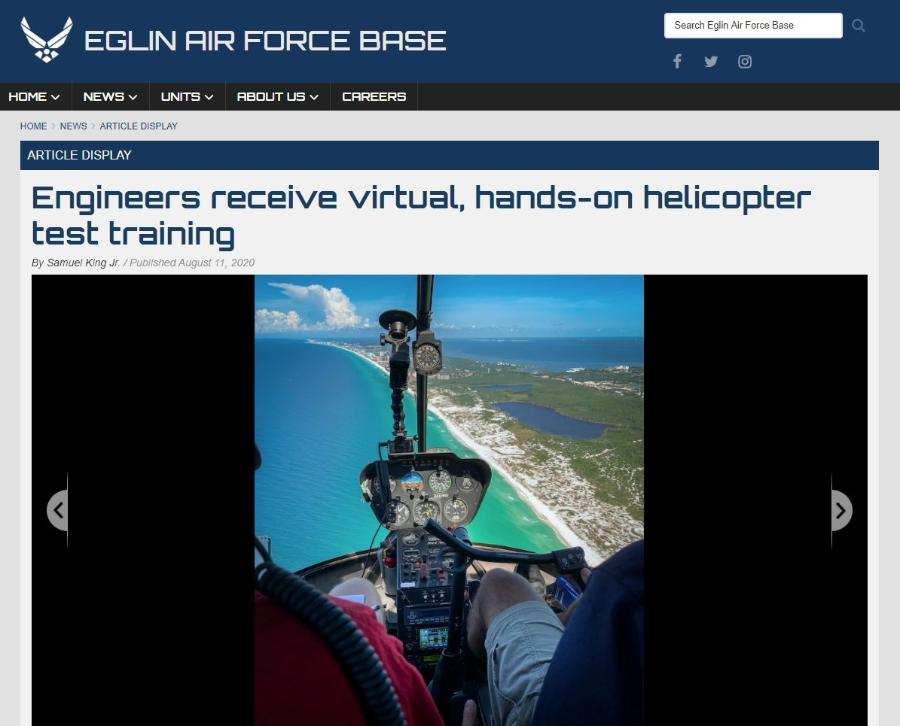 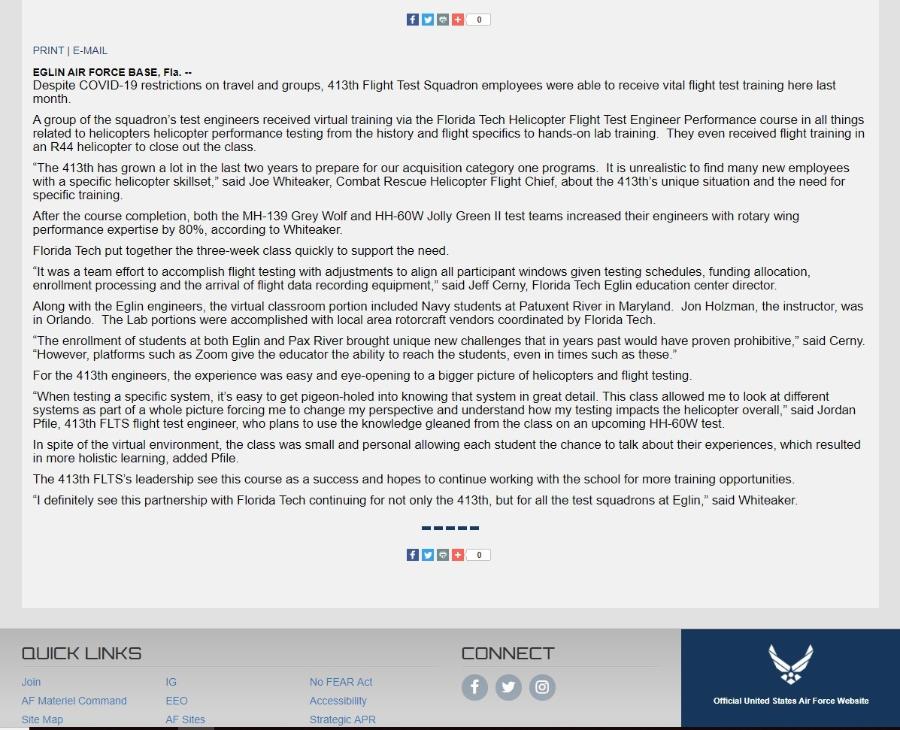 You head to a “vertiport” and await the vehicle. The drone picks you up and flies you through the city, dropping you off at your destination.

This sounds like something out of the Jetsons, but it is an eventual reality – and Florida Tech is working with the Federal Aviation Administration to provide key research data to understand how urban air mobility vehicles will safely transport people.

Florida Tech and Georgia Tech are sharing a recently-awarded, $600,000 grant from the FAA to produce research test data on urban air mobility vehicles. At the Space Coast Drone Test Center at Valkaria Airport, Florida Tech flight test engineering chair Brian Kish, aerospace, physics and space sciences associate professor Markus Wilde and a group of students are testing the capability of drones by creating flight plans of various lengths, as well as different ratios of forward and vertical flights. The data collected will provide insight into the mechanical demands of drones based off the flight plans and will allow researchers to create models that, in turn, will be able to be tested on urban mobility vehicles.

Through a partnership with Chris Larsen at Florida Tech partner Larsen Motorsports for a Fall jet engine propulsion course, Kish learned Larsen ran the Space Coast Drone Test Center. After discussions with Larsen, the researchers now had a testing site.

In a similar way to how automated cars presented new safety and emergency protocols, the researchers at Florida Tech are examining the new safety mandates that will be needed for automated aerial vehicles.

“What we’re helping them do is to help them come up with the certification standards and criteria for the vehicles,” Kish said. “But before that we can do that, we have to run experiments on the type of vehicles being considered to see what the big things the FAA needs to look at.”

In the video above, courtesy of Larsen Motorsports, Kish, Wilde and research students are discussing the goals of the study, as well as the processes involved in gathering research that will have future air mobility implications.

This week, Florida Tech Southern Maryland https://fit.edu/somd and TechPort UMD https://techportsomd.org/ worked together to deliver an important component of a core graduate course that allowed 7 flight test engineers at NAS Patuxent River to advance in their studies. 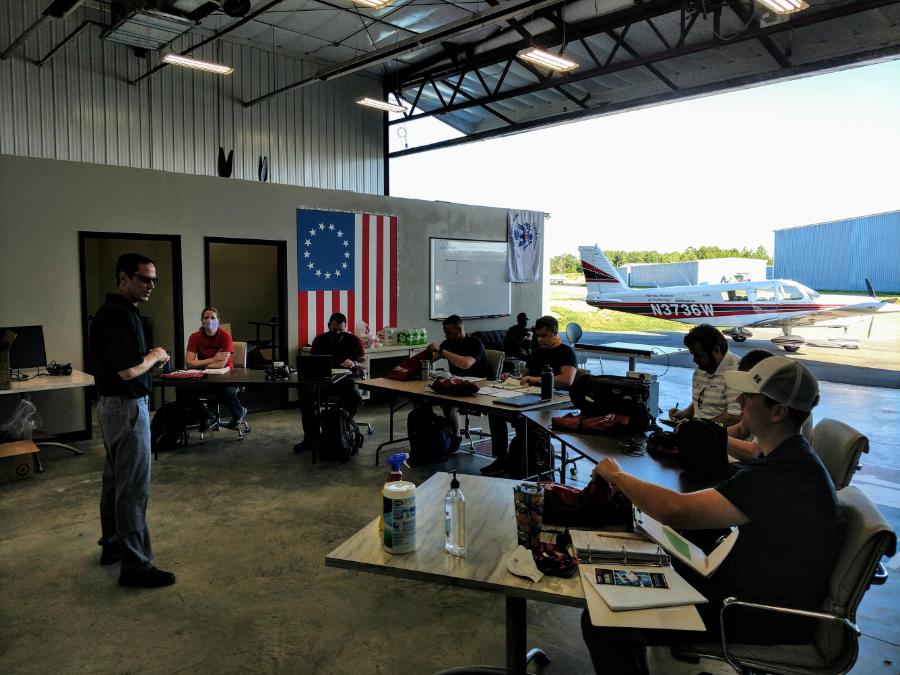 Background: Covid-19 vastly disrupted operations, most notably in classrooms everywhere. Face-to-face instruction was ceased to limit the spread of the coronavirus. Florida Tech, like other institutions, transitioned to complete remote class delivery following the 2020 Spring Break and continued through the remainder of the spring semester and into the summer semester. Flight Test Engineering (FTE) https://research.fit.edu/flight-test-engineering/ is a major program offered locally by Florida Tech Southern Maryland in support of NAS Patuxent River commands. FTE core courses require in-flight labs that could not be delivered virtually. The unique instructional format design is patterned after the U.S. Naval Test Pilot School (USNTPS) short courses involving a combination of classroom and flight labs scheduled daily over a 2-week period. The workaround for a scheduled June course was to remotely deliver the classroom portion the first week, followed by the flight labs the second week. The instructor conducted the lecture portion remotely from the main campus in Melbourne, Florida, then traveled with the university’s Piper Cherokee Six to St. Mary’s County Regional Airport as had been done in previous years. 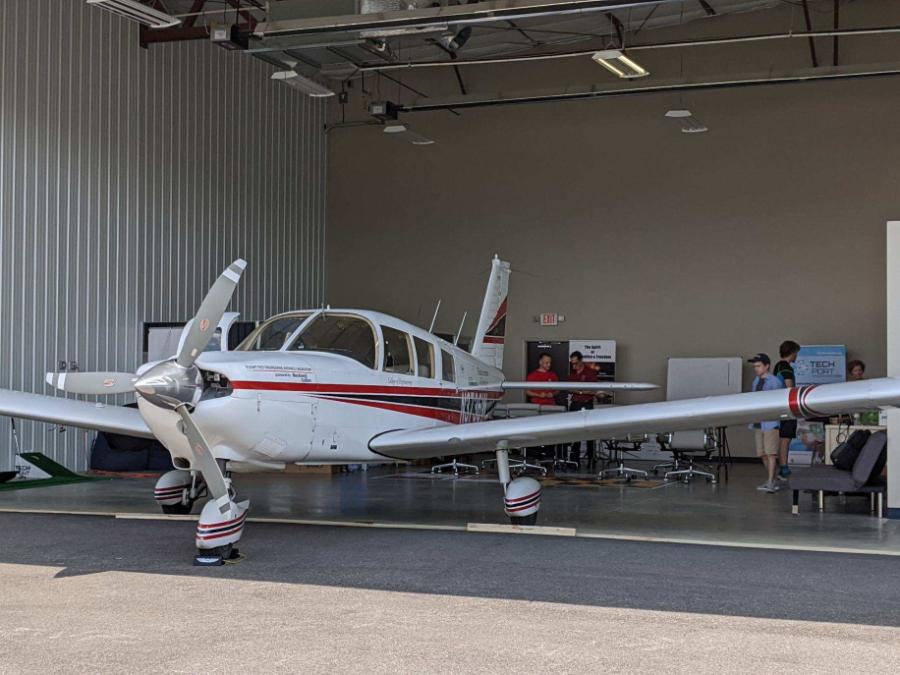 However, classrooms were not available at University System of Maryland at Southern Maryland (USMSM) higher education center where students would normally meet. Assistance was sought from other University System of Maryland facilities in the vicinity. Fortunately, TechPort UMD was able to accommodate the classroom request in their hangar at the local airport. To ensure safety of students and faculty, a detailed plan of prevention measures was developed and followed. The conference room at TechPort was too small to allow social distancing of 7 students and the instructor. At the suggestion of Tommy Luginbill, TechPort Director, space in the hangar was outfitted as a classroom. And with the hangar door opened, this enabled maximum air circulation that further increased safety of the participants. The open hangar door also allowed the aircraft to be seen and easily accessed from the classroom. In fact, on the second day the airplane was moved partially into the hangar so students could affix test items on the wings avoiding challenges presented by direct sunlight. Because of this arrangement and ideal weather, the flight labs were ahead of schedule by the 2nd day, and completed by mid-day of the 3rd day.

The partnership between Florida Tech Southern Maryland and TechPort UMD enabled a vital course to be delivered to NAVAIR flight test engineers that would not have been possible under current facility access restrictions. This may be the first return to classroom delivery for the university since the pandemic sent students and faculty home in mid-March 2020. Furthermore, the unique arrangement of running flight test labs out of a hangar made the experience that much more meaningful. Dr. Brian Kish, Flight Test Engineering Instructor and Program Chair, remarked, “This was an ideal arrangement for this flight lab course. I hope we can continue delivering flight test labs in this format.” 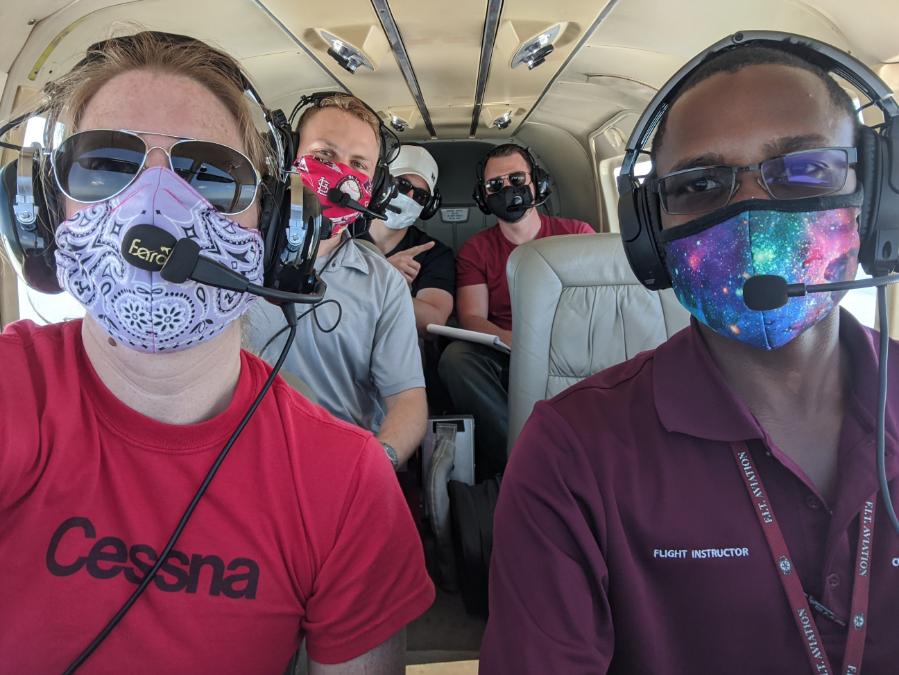 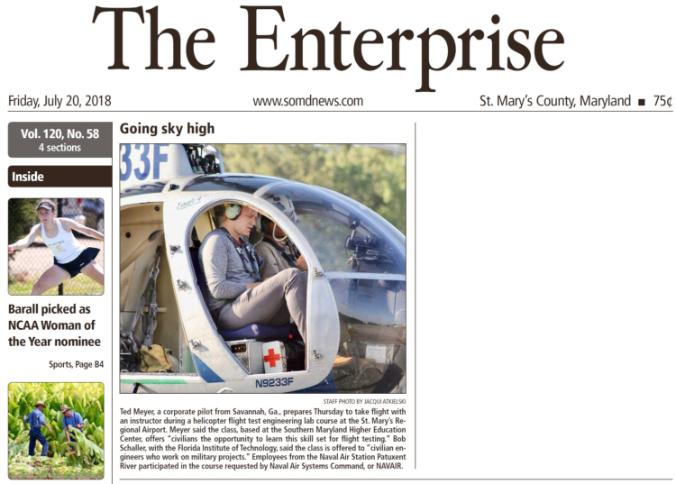 The short course was conducted as part of the Eglin Academy from May 7-25. The first seven days consisted of flying labs and academic lectures. The focus of the remaining days was online completion of lab reports.

The Florida Tech instructor was Ralph Kimberlin. Kimberlin is no stranger to Eglin, as one of his first active-duty assignments was at the Northwest Florida base. The short course was based on Kimberlin’s textbook, Flight Testing of Fixed-Wing Aircraft.

The first Eglin students for this short course were Air Force officers, an Air Force civilian engineer and flight test engineers from Gulfstream Aerospace Corporation. The course was offered as continuing education for academic credit. As a result, credits can transfer into either the Florida Tech Certificate program or the Master of Science in Flight Test Engineering (MS FTE).

“It is a huge win for the Eglin AFB community to have a world-class flying short course operating off of our flight line. The time and cost savings over having to travel to remote sites for this training are significant,” said Nathan Cook, chief test engineer of the 40th Flight Test Squadron. “Furthermore, the potential for a future degree program here at Eglin presents a great opportunity to allow our test engineers to dive deeper into the flight test discipline and satisfy important career milestones at the same time.” 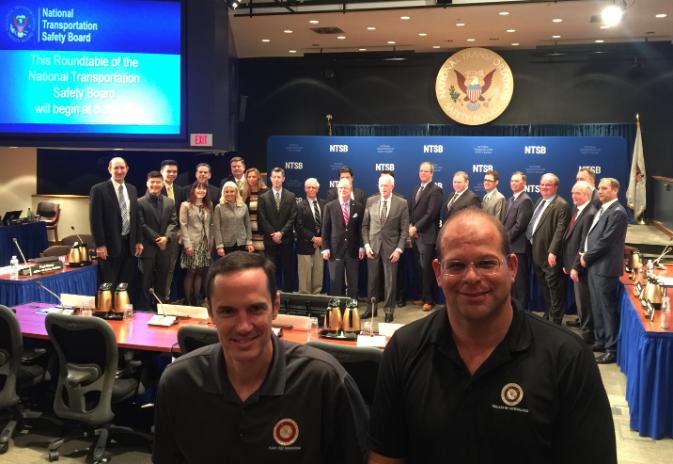 “Loss of control” is the number one safety concern for small, general aviation aircraft, according to the Federal Aviation Administration, with a fatal crash averaging once every three days. But Florida Tech research could help improve these grim statistics by looking at warning and safety systems that could alert pilots to aerodynamic stall, where the main wing loses lift causing the nose to drop. As part of a $341,000 FAA grant, Florida Tech’s Flight Test Engineering Team went to Austria this summer to assess the effectiveness of a new computer-regulated system for controlling the flight of a small aircraft.

Vehicles such as jets and passenger planes have automatic systems that prevent accidents due to pilot error, but most small airplanes still rely on the pilot to pull out of situations such as losing lift. But now, a few inexpensive “fly-by-wire” systems are being outfitted for light aircraft and tested.

Florida Tech teamed up with the Technical University of Munich, which owns and operates an aircraft with an “active stick.” The aircraft, a modified Diamond DA42, is maintained and flown out of Diamond Aircraft’s headquarters in Wiener Neustadt, south of Vienna. The active stick enables haptic feedback to the pilot by means of a change in stick force, a stick vibration, or a stick push, which automatically commands the aircraft’s elevator. In addition to haptic feedback, the team examined various audio and visual alert methods intended to get the pilot’s attention if the nose starts to drop.

The grant’s principal investigator, Brian Kish, assistant professor of Mechanical Aerospace Engineering and chair of the Flight Test Engineering program, said, “We flew 11 test flights in seven days and met 100 percent of the objectives. We were fortunate with weather, the aircraft, and the systems. Rarely to flight test programs run this smoothly.”

Kish’s research partners on the grant include Markus Wilde, assistant professor of Mechanical Aerospace Engineering and the co-PI for the project. Wilde used his connections to TUM (he earned his Masters and Doctorate degree there) to set up a partnership between Florida Tech and TUM’s Institute of Flight System Dynamics. Kish also recruited flying qualities expert Dave Mitchell of Mitchell Aeronautics Research and Florida Tech’s Ralph Kimberlin, who has flown 25 first flights of newly developed aircraft and has over 8,500 flight hours in over 250 different aircraft, as the team’s chief test pilot. Finally, Florida Tech Master’s student Jennifer Geehan led test preparation, data analysis and report writing.

Kimberlin flew the first five missions to test the active stick technology in the Diamond DA42. A senior fellow of the Society of Experimental Test Pilots, Kimberlin said, “The fly-by-wire DA-42 was the first and only aircraft in 54 years of flying airplanes where I had the opportunity to compare visual, aural, tactile and pusher stall warning systems at the same time, which I found to be enlightening.”

Geehan will use the data from this program for her thesis. Before arriving in Austria, she spent six weeks in Munich preparing for the program and two weeks in Wiener Neustadt for the flight campaign. She flew two missions in the DA-42 as the evaluation pilot. 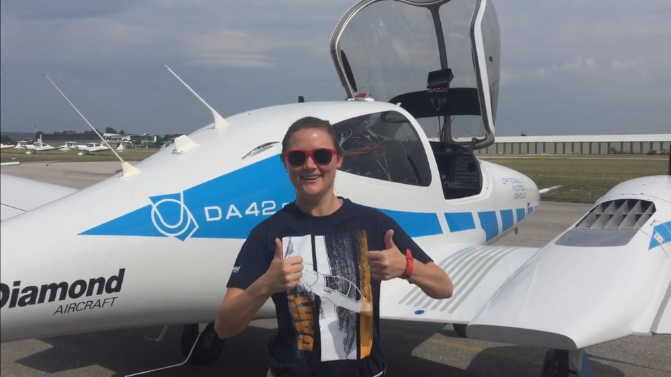 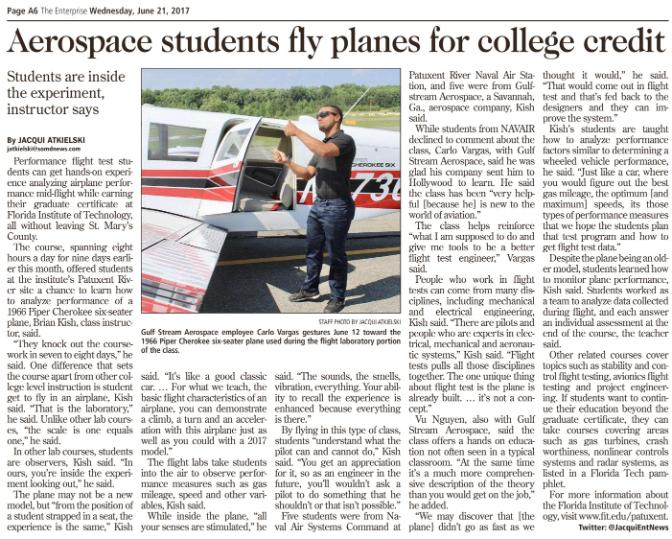